FormulaCAD automates the creation of drawings and modules by defining reusable unit components stored inside a database and controlled through user-defined rules.

Standard CAD software have parametric facilities, whereby change in parameter will lead to change in dimension of geometry or model. However, Knowledge based Engineering or Rules based Automation goes much beyond that, whereby it becomes possible to capture and implement much more complex rules and logic, like the one shown in above figure. 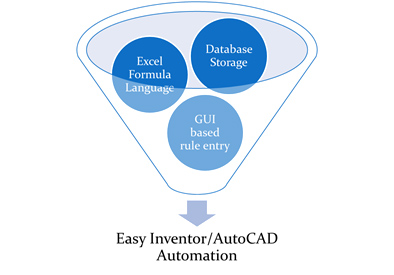 FormulaCAD stores its data in a database leading to various advantages:

FormulaCAD is available in the following variants, allowing you to choose as per your environment: